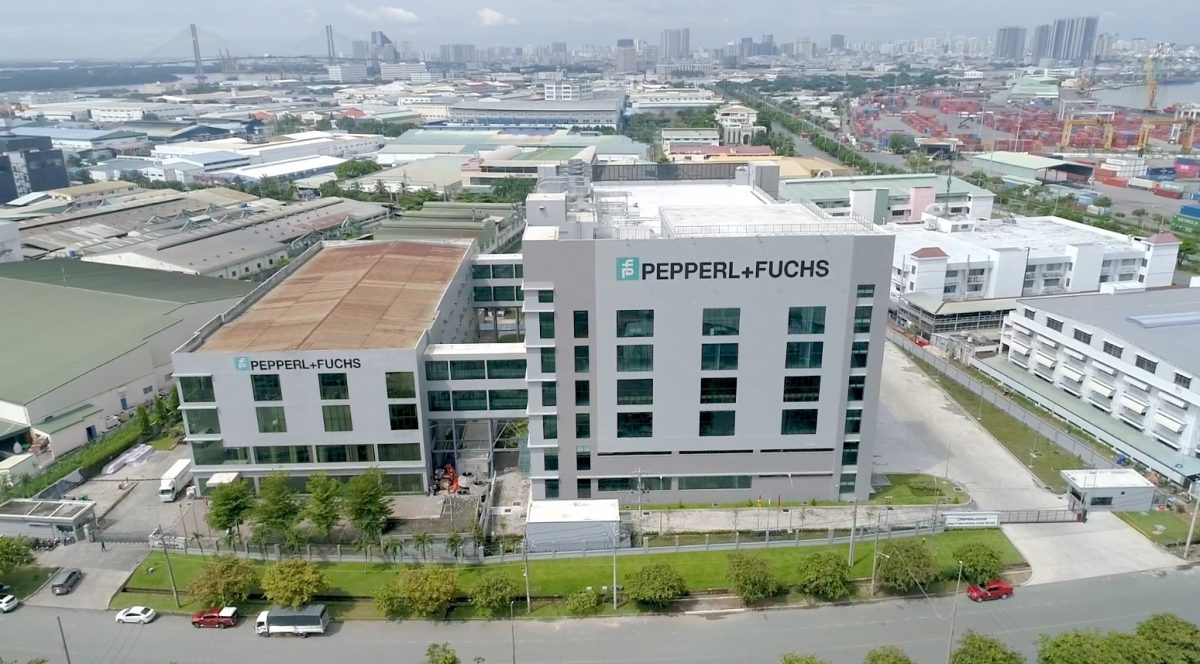 The cornerstone for a new factory building was laid at Pepperl+Fuchs in Vietnam on November 18, 2019. The state-of-the-art new building was completed on June 4 of this year, and the company moved in quickly afterward.

A new five-story building has been constructed for Pepperl+Fuchs in Ho Chi Minh City, right next door to the company’s old building, which is about 15 years old. The outer appearance of the impressive new construction does not give away just how challenging it was to meet the stringent building requirements and to complete it within a tight schedule. To make matters worse, the Corona pandemic brought the entire project to a halt for six months in the spring of 2020, shortly after the foundations were completed.

Work did not resume until October 2020. “Our new plans called for the building to be completed by the end of 2021 at that point,” explains Han-Thanh Hong, Managing Director of the Pepperl+Fuchs branch in Vietnam. “But then, a hard lockdown in Vietnam put our plans on hold again in July 2021. That meant that it wasn’t until October of last year that we were able to continue work on the building, which was completed in early June.” The new construction has added a further 20,000 square meters of space to the 10,000 already available in the old building.

On top of the fact that the building was completed amid the pandemic, the requirements in terms of building technology were unusually stringent for Vietnam and, therefore, a further challenge. In addition, the plan to relocate the new injection molding production systems to the top floor was very demanding. “The reason for that was that we wanted to build bridges to connect the two buildings, so the ceiling heights for the lower floors had to be identical on both sides, at five meters,” Hong says, explaining this unusual step. “But a plastics injection molding machine  requires a minimum ceiling height of eight meters. And ideally, it shouldn’t be placed at the very top of a building because the machinery required for the facility is very heavy. Otherwise, you have to make sure the building has a floor load capacity of 1,000 kilograms per square meter, as we did here.”

Right after the new premises were completed, the team in Vietnam faced the next challenge. This time around, perfectly tuned logistics were absolutely essential. Since the older building was supposed to be renovated and brought up to the latest standards, it had to be vacated and cleared out, with the entire move being carried out in just a short time. The team only had four weeks to turn the building over to the construction company. In addition to the tight schedule, there were other key requirements for the move. A crucial factor was to make sure there were no accidents whatsoever, even with everyone hurrying to meet the deadline. The company also had to ensure that operations could continue without disruptions alongside the move, which meant that each of the 20 lines was scheduled to resume production after no more than two days.

“To give you an idea of the scale of the move, we had to relocate 253 machines, 468 benches, 188 production shelves, 84 cabinets, and 75 warehouse shelves, among other things,” Hong notes. “The fact that we managed it all on time was thanks to truly outstanding teamwork.” When the renovation of the old building is complete, the administration, supporting departments such as Industrial Engineering and Supply Chain, and about 40 percent of the production activities will move back in. That will mean about half of the current workforce of 1,100 will work in the new building, and the other half will be located in the old one.

The new building gives the team in Vietnam enough space for the site to grow as planned. Right now, photoelectric and inductive sensors are produced there, along with camera systems and rotary encoders. Future plans call for new production lines and as many as 900 more employees. The bottom two floors have also been combined to create a large ten-meter-high warehouse. It now has sufficient room for all the goods that previously had to be stored externally. Employee wellbeing was another focus of the expansion project.

“Before, our staff cafeteria was housed in an annex building, but it only had enough room for a small fraction of our employees,” Hong says. “As a result, the staff had to eat in three shifts between 11 a.m. and 1:30 p.m. Now, we have a nice big cafeteria where people can enjoy their breaks. Our employees are really excited about it.” An official inauguration is tentatively scheduled as a well-deserved event to celebrate the tremendous amount of effort invested in the new building.

Would you like to learn more about the career opportunities at our location in Vietnam? Have a look at our career portal!