Caius, an employee at Pepperl+Fuchs subsidiary Neoception, wanted to experience a really big adventure. So, in 2019, he and two friends took part in the Mongol Rally: from Prague to Ulan-Ude in Russia and back – around 28,000 kilometers through 19 countries in a Polo built in 91.

There aren’t many rules participants in the Mongol Rally have to follow. The maximum engine capacity per vehicle is 1.2 liters, and every team has to donate at least GBP 1,000 to charitable organizations. However, as for the route from the starting line in Prague to Ulan-Ude, Russia, the teams are on their own. Pepperl+Fuchs supported Caius Ruff and his team with their plans. “We got a GPS tracker from Neoception which continuously reported our position, for example,” Ruff explains. A website was also built for the team, and Pepperl+Fuchs subsidiary ecom instruments supplied end user devices to be put to the test under rally conditions. Those were a big hit, as the tablet, smartwatch, and flashlight stood up to the challenge. The companies’ logos were also featured on the vehicle as sponsors.

“At the outset, we thought the biggest challenge would be having to be constantly in each other’s company for ten weeks. But looking back, that wasn’t an issue,” Ruff says. “The Wakhan Valley, though, on the border between Tajikistan and Afghanistan, was a real challenge for us. Waking up at night at over 4,000 meters above sea level, gasping for breath because the air is too thin – it was an extreme experience.”

This is what teamwork looks like at the mongol rally

It was truly the high point of the trip at the mongol rally, and not just in terms of altitude, but also when it came to technical issues. The team had to patch the tires about ten times before that; the tailpipe fell off countless times, and they even had to change the wheel bearing in Turkey – but there, in Tajikistan, the Polo had an especially hard time. An impact damaged the transmission at the most remote point on the tour, and then, when another team tried to tow the car, its entire front end tore right off. To make matters worse, after a truck carried them onward, the tires gave out as well, and one window and the fuel tank were also damaged – really a total write-off. But with help from some locals, the team managed to get back up and running in just four days.

On the whole, the trip involved a lot of very special experiences and encounters. “Everyone we met along the way was actually very friendly – even the border officials,” Ruff explains. “But our time in Iran was definitely a highlight. You often hear that Iranians are extremely nice – but they’re even friendlier than you could ever imagine. Our car is pretty noticeable, and we spent practically the whole time with just one hand on the wheel, since we needed the other one to wave. People also gave us so much fruit and homemade baked goods through the window along the way that we didn’t even need to stop at a restaurant.”

A side trip to a children’s home

A side trip to a children’s home in Ulaanbaatar, the capital of Mongolia, also made a big impression on everyone. Ruff’s brother had helped out there in the past, and through him, the rally team got a call for help while they were on the road: The home urgently needed funds for a new heating system. The three of them didn’t just stop by in person as they had originally planned; they also launched a donation campaign through their website. The children’s stories were some of the most emotional moments of the rally for them. After all these experiences, none of the team could imagine bringing the trip to an abrupt end and just flying back. Instead, right before crossing the finish line on September 12, 2019, they decided that they would drive the Polo back home as well – another 9,000 kilometers.

The team really racked up both kilometers and donations, transferring 1,753 euros to the nonprofit German bone marrow donation center (DKMS), 637 to climate protection organization Cool Earth, and about 1,000 to the children’s home in Ulaanbaatar.

That only leaves the question of what became of the fourth member of the team, the indefatigable Polo. “It’s in a museum now,” Ruff says. “PS.Speicher, the car museum in Einbeck, has it on display due to its unusual history.” As for their takeaway, Ruff speaks for everyone when he says: “It was the adventure of a lifetime for me, and I’d do it again in a heartbeat.” 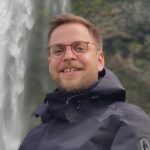 Caius
Product Manager Digital Services
Working for Pepperl+Fuchs since:
April 2019
Weakness for: Good food
What he cannot live without: Travel
Motto: You only regret what you didn’t do.