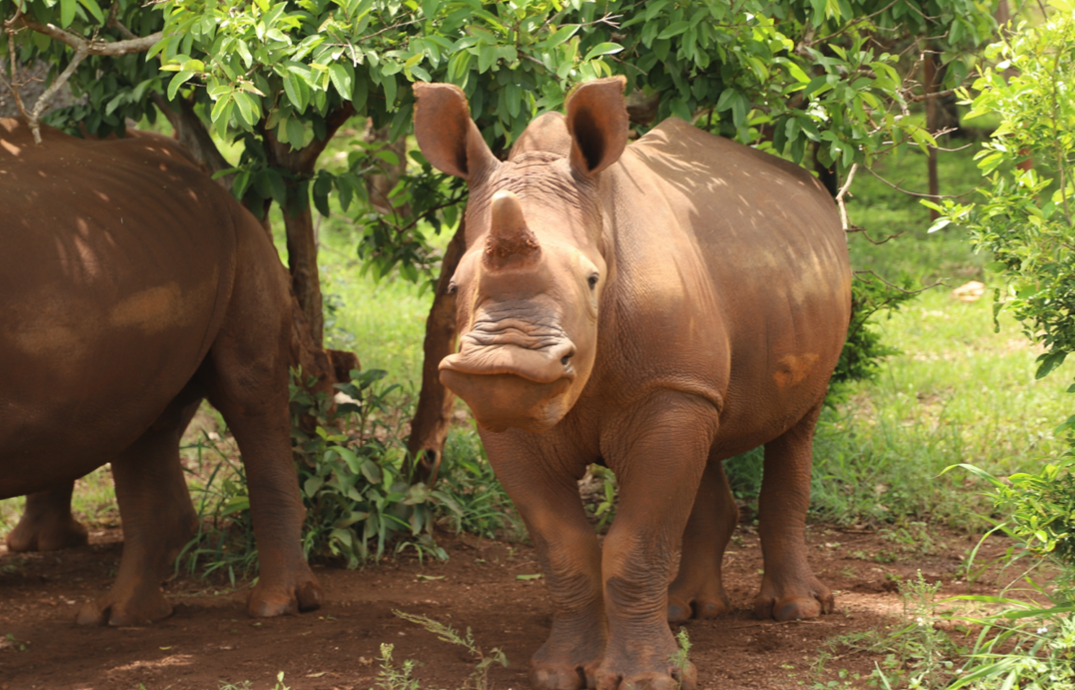 It has been over six years since Pepperl+Fuchs began sponsoring an orphaned baby rhinoceros named Oz. Now an imposing bull, he lives at the Care for Wild Rhino Sanctuary in Mpumalanga, South Africa, a reserve for orphaned rhinos. After suffering some health problems in recent months, the pachyderm is now enjoying the African summer in his new reintroduction area.

Oz spends his days in the tall grass, under the acacia trees, or on the riverbank. He is always accompanied by Don, his best friend from early life, with whom he shared an enclosure as a baby. “The two of them really have a very special bond,” says Petronel Nieuwoudt, who founded the Care for Wild Rhino Sanctuary some 20 years ago and specializes in caring for orphaned and injured rhinoceroses. Thanks to the excellent care he received at the sanctuary – the largest of its kind in the world, spanning more than 28,000 hectares – Oz was reintroduced to the wild in the adjacent reserve in 2017, after two years at the station for rearing young animals.

This past June was a very special month for Oz and Don, since it marked the start of the next stage in the rewilding program, when they were allowed to leave the intensive protection zone with a few other rhinos. The animals were sedated with medications so they could be loaded onto a truck and then moved to a larger area. Each one was also blindfolded and given earplugs, and the keepers removed their horns in a routine procedure. This protects the rhinos in two ways: from injuries inflicted by others of their kind and, most of all, from poachers. Driven by the rhinoceros horn trade, poaching has devastated the rhino population in Kruger National Park, with numbers down by nearly 70 percent in the past ten years. The white rhinoceros family, which Oz belongs to, has long been endangered.

When removing Oz’s horn, the keepers discovered a wound on his face. He had probably gotten it a few days before in a scuffle with Storm, a dominant rhino. After ointment and bandages were applied, Oz was weighed along with the other rhinos.

Oz now weighs in at nearly a ton, almost twice as much as when he was first reintroduced to the wild, four years ago. Veterinarian Dr. Marita Rath also took the opportunity to draw one to three liters of blood from each rhino while they were sedated. The Care for Wild Rhino Sanctuary is one of the few facilities to maintain an emergency rhino blood and plasma bank. “Plasma contains vital antibodies that support the development of a young calf’s immune system, which is especially important if the orphan never got colostrum from its mother,” says Kgomotso Makhobela, Executive Office & Marketing Assistant at Pepperl+Fuchs South Africa, who reports regularly on the sponsored rhino on P+F Net.

The world’s first rhinoceros in a CT-Scan

After that, the rhinos were moved to a temporary reception camp in the new expansion area. Oz received special attention there, too. His wound was swollen, so he needed to be sedated again. He became the first rhino in the world to undergo a CT-Scan, and blood samples were taken as well. In the examination, a tooth root abscess was found deep inside his nasal cavity. Oz was treated with drainage for several weeks, antibiotics and anti-inflammatory painkillers. Caretakers changed his bandages daily so that they would not attract flies. “Oz was in good spirits the whole time, though, in spite of his injury. He enjoyed life away from the other bulls, with Don for company,” Nieuwoudt notes.

Luckily, Oz’s treatment concluded in August, and the bandages could be removed. “That meant he was fully recovered and in good spirits on September 22, the day when the Care for Wild Rhino Sanctuary celebrated World Rhino Day, raising international awareness of the illegal wildlife trade and the plight of rhinos,” Nieuwoudt explains. “This wonderful animal that has inhabited the earth for 50 million years is almost extinct now.” And the stakes are even higher, she says: “Ensuring that there is a viable rhinoceros population also means protecting an entire ecosystem. Care for Wild is helping to preserve and protect biodiversity and South Africa’s heritage for future generations.”