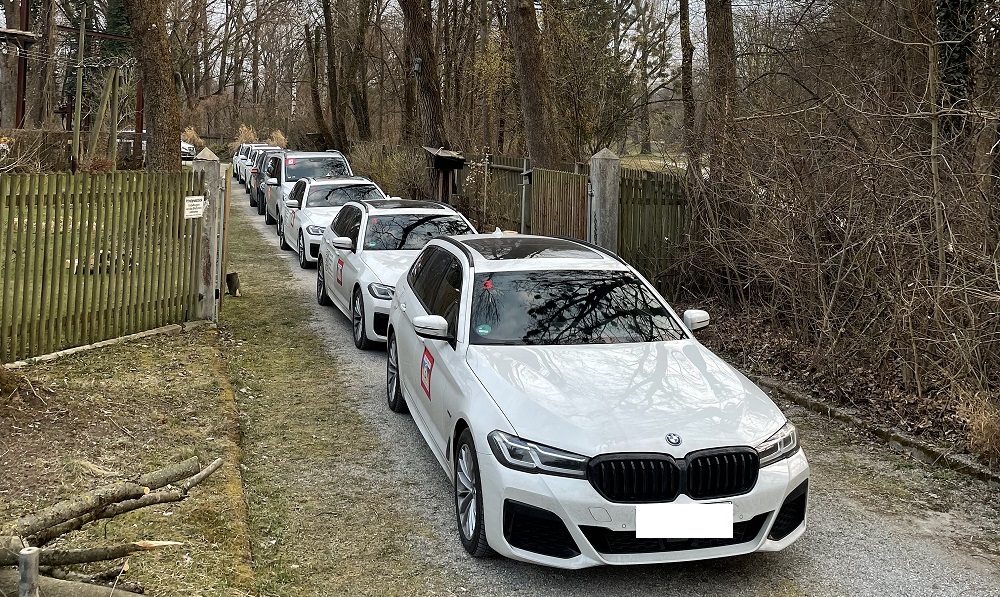 Hendrik, technical sales specialist at Pepperl+Fuchs, is used to spending a good deal of his time on the road. But not quite in this way: From March to the end of May, he was a volunteer driver for the Civil Relief Munich aid organization, drove to the Polish-Ukrainian border to pick up refugees and take them to stay with host families in and around Munich.

Hello, Hendrik. What prompted you to help refugees from Ukraine, and why did you decide to help out in this way?
Hendrik: When the war broke out in Europe, this terrible topic felt so tangible to me that I simply had to pitch in and help. I happened to come across a LinkedIn post about an organization called Civil Relief Munich which was looking for volunteer drivers to transport vulnerable people from Ukraine. It attracted my interest right away, so I signed up for the next weekend. Since I’m a field rep, I spend a lot of time driving anyway. I am a very steady and safe driver, so helping out in this way with Civil Relief Munich seemed perfect.

I got a call from them on Friday asking me to be in Munich at 6 p.m. on Saturday for a 7 p.m. departure. My first trip was on March 19, and I’ve been many times since then. I wanted to do more to help, so I took a week off in early April. When I wasn’t driving during that time, I helped out in Munich with the fleet, loading the vehicles with aid supplies and getting them ready for the trips and wrapping up afterward.

What is Civil Relief Munich, anyway, and what exactly does the organization do?
Hendrik: Civil Relief Munich is an organization financed by donations which mobilizes a large number of volunteers, supporters, and networks swiftly in a crisis. It provides aid quickly and without a lot of red tape wherever it is most needed. Until the end of May, convoys of ten to 25 vehicles travelled to multiple locations on the Polish-Ukrainian border to pick up vulnerable people and transport them directly to host families where they were placed by Civil Relief Munich, in and around Munich.

The convoys also delivered medications, food, and specifically requested aid supplies to the border daily. The Ukrainian partners working there then distributed these items to where they are needed. Since May 24, however, the organization’s supportive measures have changed somewhat. Civil Relief Munich strives to always adapt to new circumstances and accordingly offer help where it is needed.

Trips for refugees to Germany

What were these trips usually like?
Hendrik: After a driver briefing, which took an hour and a half, we usually hitted the road at about 7:30 p.m. To make sure we can drive the whole stretch, over a thousand kilometers, without making any major stops, every convoy had a couple of standby drivers who can take over. On the way, we found out where exactly we are going on the Polish-Ukrainian border – info like the name of the city, and whether the meeting point is a gas station, a McDonalds, or a warehouse, for instance. We usually arrived around 7 or 8 a.m. Then we refueled the vehicles, freshened up briefly, and unloaded the supplies.

Before the return trip, the convoy management assigned the refugees to the individual vehicles. Shortly before we set off again, we drivers got the addresses of the host families where we were taking our passengers. If there was a spot free in the car, we stopped by at local train stations and saw whether there were any other refugees there who needed a ride to Germany. If so, and if they don’t yet had a place to stay, the housing team at Civil Relief Munich gets to work, making arrangements during our 12- to 15-hour drive back. Anyone who doesn’t yet had a host family assigned by the time we arrived in Germany went to the Munich trade fair grounds first for initial registration.

What kinds of challenges were there?
Hendrik: Luckily, the organization was still receiving a lot of supplies and other donations, like the financial support provided by Pepperl+Fuchs and others. There was an ordering system of sorts. Civil Relief Munich might, for example, heard from a Ukrainian children’s home that it needs two washing machines and dryers. The organization went to work to meet the need, either by using donated funds to buy the appliances or by arranging for the items themselves to be donated, and then delivered the items.

The organization also worked to make sure the guests and the host family are a good fit. For example, a mom with a 14-year-old son who likes to play soccer was placed in a family that also has kids who enjoy soccer. It it’s so nice to see how people can work together for a good cause, drawing on extraordinary reserves of strength and energy, and how grateful people are for the help.